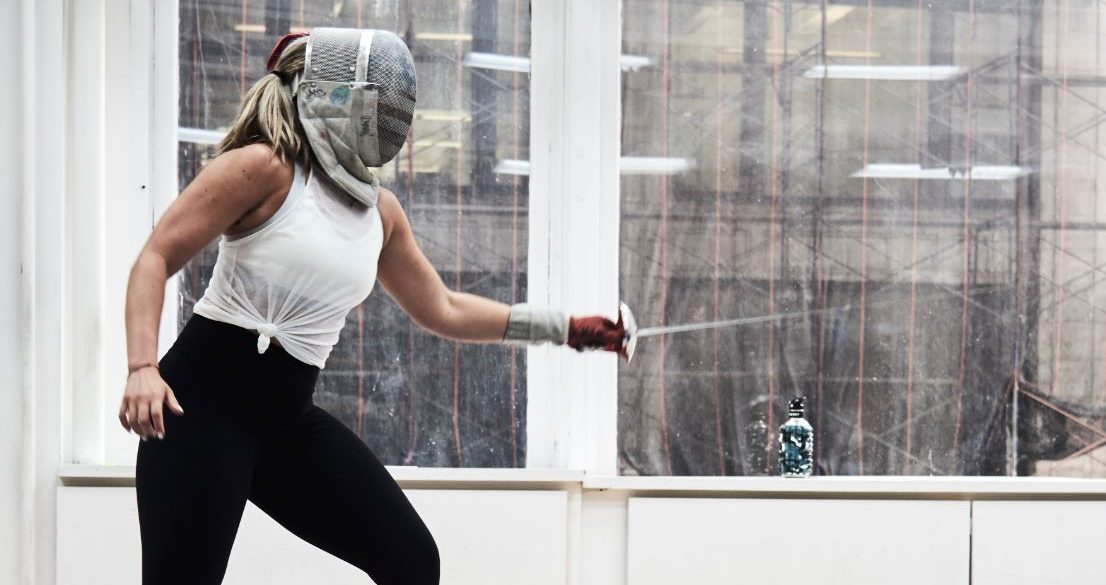 There’s no one who knows how to tackle challenges head-on better than Olympic fencer Dagmara “Daga” Wozniak. As a professional athlete, Daga is used to people telling her that she can’t do something.

She’s never let that stop her, seeing as she’s ranked as one of the top 10 saber fencers in the world.

I feel like the most successful people have been the ones that said, ‘No, I’m not going to listen to your naysaying and I’m going to take it to the next level.’

We talked to Daga about what her journey looks like to perform her best in Tokyo 2020, how she feels about her compensation as a professional athlete, and how she tackles her “scary” relationship with her finances by taking control of her money and using it as a tool to level-up her career in fencing.

Tell us a little bit about what practice looks like for you?

Well, right now I’m practicing probably the least I ever have, about three times a week. I’m recovering from my first surgery, unfortunately. So, you know, it’s been a new process.

I’m training three to four times a week while focusing on getting back on to the strip and sparring against other people in my club. One-on-ones with my coach, that’s about three or four times a week, as well. And then personal training with my strength coach four to five times a week to try to get myself back stronger.

The goal is to be in top shape for Tokyo.

When you are in top health, what’s your on-the-road schedule look like?

We have one or two World Cups a month, and that’s the whole year. Most of the competitions are in Europe, so we’ll find a training center where everybody gets together and then we can fence against each other. We do have a lot of opportunities in terms of competition, but don’t always have a lot of downtime to train together. It’s about a week in between that we’ll stay and train.

You’re just constantly on the road. And since you’re in the US, you must be traveling serious distances.

Yeah, people think it’s a glamorous life but I think people don’t realize that I’m going there for a job, so my priority is not sightseeing and going out on the town. This past year was the first time we went to Cairo — so we made a trip bucket list to see the pyramids and kind of go out and get an experience of the city.

But you know, the second time around, I probably wouldn’t go to the pyramids. My job is to go there, focus, and be as ready as I can for the competition because we don’t have a lot of adjustment time. We usually fly Wednesday, get there Thursday, compete Friday, Saturday, Sunday, and leave Monday; it’s really fast in and out. I don’t think my jet lag on the way there even sets in by the time I get home. It’s like I’m dealing with two different jet lags then.

Basically, I just get to visit different hotels of the world.

You have to push your body to your limits once you get there. How do you keep your performance high?

It’s a lot of us trying to find ways to combat that. We have compression socks; we have things to help us sleep on the plane. We bring a lot of our own snacks so it feels as much like home or as comfortable as possible. I’m also really big on taking care of my face and my hair. So I bring my whole bathroom with me. I think I bring more beauty and hair products with me than clothes!

When you turned pro what surprised you the most about it?

I would say definitely how much you have to be in charge of your finances to make things work. It’s obviously a little bit easier when you have parents or school being able to help you.

In my case, I was lucky enough (and very thankful for) a full ride to St. John’s University, having my books covered and things like that. I graduated with zero debt, which puts me in a much better position than most kids that are going to school these days.

But I knew that if I wanted to focus on training, going into the city every day, and making sure I’m eating for performance, I had to find a way to make that work.

Even when I turned pro, we didn’t have a system set up where we had a lot of sponsorships coming in. So it’s a lot of fending for yourself, and you need to make that work or else you’re going to have severely empty pockets.

Tackling that head-on was probably my biggest “whoa.” This is not only adulting, this is being pro. Like how am I going to make things work? And how am I going to be able to afford the things that I know are going to take me to the next level?

Do you feel fairly compensated for the work that you do?

It’s a hard question to answer because there are so many ways that people can be compensated. Compared to other athletes and compared to other sports, we don’t have a lot of financial endorsements that are helping us with our training.

But, you know, hearing adults and kids come up to you and say, “I think you’re my idol” or “I love the way you fenced and I watched you here and there” — that is something that is much more powerful and fulfilling than a lot of money. Don’t get me wrong, I like having money. But there’s just so many ways that this sport has also made me feel very well compensated.

Have you ever been told you couldn’t do something?

And have I taken it personally, yes, I mean, I’m human. But I feel like I’ve tried my best not to listen to what people say.

What do you tell yourself when you hear that kind of feedback?

You have a negative thought, or someone says something to you, and you start with, how does that make you feel? It makes me feel sad, or it makes me feel upset.

And then what’s the reality of the situation? I don’t have a weight class in my sport. So why does body type even matter.

People always have something negative to say, and you just have to look at the reality of the situation. Does it apply? And if it doesn’t, then you just toss it and move forward. They’re just haters.

There’s so much research out there that says, the more people talk badly about you, it means that they’re taking notice, and you’re obviously doing something right.

What advice do you give the next generation of female fencers?

But I think, you know, the whole “I don’t want to fence against my best friend because then she’s gonna hate me,” that’s not what the sport is about. It’s about a battle of wits. It’s a battle of physical ability. And it’s not something to take personally against yourself.

I hear a lot of kids like don’t want to fence someone because they don’t think they’re good enough or the last hurt too much. Like there’s just so much emotion registered from losses and wins.

I know that I went through that with myself, and I don’t want to see younger generations learn the process of beating yourself up because it’s a very hard habit to break. Especially when you have people around you telling you negative things like you’re not fast enough, you need to do this, you need to change that. But if you’re doing that to yourself, it’s just too much.

So I just want girls to you know, be more confident and not register the negative emotions as personal attacks on their character. It has nothing to do with it.

What is your relationship with your finances?

My relationship with my finances is a scary one. I try my best to budget to figure out how I can afford some of the things that I want/need, like I said, to take me to the next level, such as sports massage or being able to afford high-quality food to train and to recover.

Even budgeting for my Normatec pants (for recovery) so that I can have my own that I can travel with. So there’s a lot of things that need to be budgeted for.

It’s difficult because the rate of my spending doesn’t match the rate of my incoming money to be fully honest, but I’ve made it work. I just think I would like to be better at being able to save up and to afford things that I need to get me to the next level.

How can we help you reach your goals?

I think Nav.it can help me prioritize what’s important to further my training, and also at the same time, look at what is going to come after being a pro-athlete. I think that it’s smart to plan, and I think that it’s scary, but it has to be done and I would like to be more educated so I don’t finish starting from zero.

Thank you, Daga, for your wisdom, insight, and fierce determination to inspire us all.