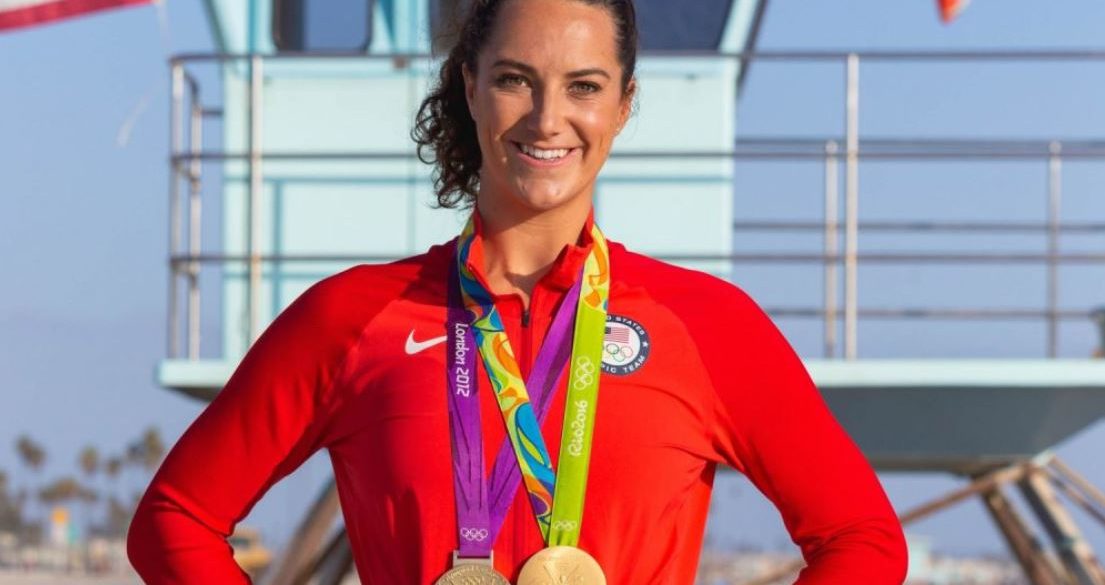 Maggie Steffens is not only a female co-founder in the startup space, nav.ing entrepreneurship and the highs and lows of growing your own company–but she’s also an Olympic athlete.

As a pro-athlete on the USA women’s water polo team, she’s pushing the bounds of what her body can do six days a week, achieving levels of greatness (in the form of two gold medals in 2012 and 2016) in the face of grueling feats that only a complete badass could.

But she doesn’t do it alone. Like all great leaders, Maggie credits her team for the strength that keeps her pushing toward her goals.

If we’re hurt, or if we’re mentally struggling, I know we have a team behind us and with us, and I’m really grateful for that. I could not be an individual professional athlete, I would seriously struggle. So being a part of a team is really important to me and to what we do.

We got to talk with Maggie about her amazing career and journey toward Tokyo 2020, her relationship with her finances in light of the gender pay gap, and her aspirations for a financially healthy lifestyle that can support what it takes to be an Olympic athlete:

Tell us a little bit about your job as a professional athlete.

We train from 7 to 10:30 in the morning, which includes a weightlifting session and conditioning. We train again from 1:30 to 4:30 in the afternoon, which is usually more water polo strategy, game-based, competition-based, and we do this four days a week. Twice a week we just do one four-hour practice.

Sunday is our only day off. But for us, what separates our team from others is the way we treat our sport. I personally think that we treat it more professionally than a lot of other countries in the sense that we come to practice every day, six days a week. It’s our full-time job.

Our bodies are our machines; we make sure to treat them well. We have a nutritionist, we have a strength trainer, we have a physical trainer, and we have a lot of resources we can use that have been provided for us by the USOC (United States Olympic Committee), which is an amazing gift to us.

This is pretty much our day-to-day grind. In terms of being a professional athlete, we have a lot of goals that we’re trying to achieve on a daily basis that are under the overwhelming goal of going to the Olympics and winning an Olympic gold medal. And that’s something that’s an amazing bond.

How do you shake off a loss?

I think there’s always a lot to learn from a win and a loss, but a loss makes you feel it a little bit more. A loss is always a really good self-reflection period. Instead of thinking of it as a pity party, I think it’s a really good way to reflect on the things that you can learn from yourself and from your teammates.

I also use [loss] as fire. If you like the feeling, maybe this isn’t the sport for you or competition isn’t for you. But if you don’t, try to remember that and feel it, so that you know when you’re not doing so well the next game, it gives you a little bit of fire and energy.

When you decided to make water polo your full-time priority, what surprised you the most?

When I became full-time before the 2012 Olympics, I was just surprised at how overwhelming this process was. I mean I love water polo and I love the team aspect. I love the game. But all of a sudden there was just so much more to it.

There was preparing for the Olympics, which isn’t just your physical preparation. There’s mental preparation, mindfulness, there’s nutrition, making sure you’re getting enough sleep. And I was really young. I was still a teenager when I first joined the team. I had thought of that stuff, but I never really made it such a priority. Becoming a full-time athlete, you realize that there’s so much more to it than just a game.

I thought I was giving water polo everything I had, but when I started doing it full-time, I realized there are so many more aspects to it that I had to give.

What are some of the biggest challenges to pursuing this path?

It’s a really demanding process on your mind. This is our full-time job, which is basically competitive practice every day, pushing yourself past the limit every day, and then having to do it again the next day.

Mentally, it’s really, really tough, and water polo itself is a super mentally tough game. Not only doing that day in and day out, but now I’m on my 10th year on the national team. So that’s definitely you know, a change, trying not to get burnt out and still trying to love the sport and be mentally resilient and focused.

You are not making a ton of money. You think about how do you balance that. How to create a life revolved around a smaller salary, and still try to live a happy life where you’re able to treat your body the way it needs to be treated. And also how you treat your mind so that you can enjoy this life on a smaller salary and smaller time of freedom.

Do you feel fairly compensated for the work that you’re doing?

This question is always really tough for me because I came into the program when it was way different than it is now. I think our success and the growth of the sport has really helped with our financial situation now. When I joined the team, we weren’t getting much money; we didn’t have many other resources.

Now we get lunch brought to us three to four days a week. And I consider that a huge gift, right? Because I didn’t have that before. And I see how much value there is to it.

But for some of the girls, that’s what it was when they joined the team, so it doesn’t seem any different. We’ve always had to be a super gritty team, and we don’t train at the nicest of facilities, and we don’t get paid as much as most athletes. I’m trying to open the door for future athletes to see a career in water polo by getting sponsorships, but not many girls on our team even try because it’s never really been done before.

I think it makes us a humble team. And I think it reminds us of where we came from. And it keeps us really gritty when it comes down to games.

I don’t believe that we get compensated fairly for what we’re doing, especially when you look at the success we’ve brought to Team USA and to the sport and also as women athletes. I think we’ve really opened up a huge door, but we’re not on the platform to be noticed. And because of that, the need for that higher compensation isn’t as obvious to other people.

It’s tough because USA Water Polo is not just for the national team; we’re trying to grow the youth sport. Considering what we do, it’s pretty crazy the way that we are compensated. Luckily, they just started raising the prize money a bit more for women, but it’s still not equal.

That’s still a struggle that we’re trying to push for, but it’s hard because I’m also really grateful that I’m receiving more money than I have in the past. And so for me, this amount of money is huge. But in terms of what I believe our team should be compensated for, I believe we could definitely be making more money.

What advice do you give the next generation of water polo players?

My advice would be to be more open-minded to the future of water polo. It’s not a career path most people talk about, but we are trying to open that door. The more that people can stick with it and see water polo as a possible career path, the more that we can grow this sport and inspire even more kids.

I would honestly advise seeing a future in it. Don’t think that it has to stop at a certain point. If you love it, if you enjoy it, if the teamwork brings you joy, if the values of water polo bring you joy, then see a future in it and believe in it because it’s definitely possible.

What are some of your long-term goals?

Athlete-wise, I mean, Tokyo’s not long term, but I definitely enjoy being a part of the Olympic movement. I want to be involved in that as much as possible, whether it’s as an athlete I am today or helping move that movement forward, or just encouraging other athletes post the athlete life.

Also, I’ve started a company. I would love to see that grow even more and see where we can take that. I would love to be a part of helping other companies grow. That’s something that’s really important to me.

Thank you, Maggie, for your honestly, sportsmanship and showing us greatness comes in many forms and is never found alone!

We’re changing the narrative around money but change can’t happen with a one-sided conversation. That’s why we’re excited to bring different voices and experts to share their wisdom and building a wonderful community inside the nav.it money app . Send us an email and let us know what you think.

For Love of Women