2010 was a great year. I graduated college, I got my first “big kid” job at a public accounting firm and life was looking promising. There was only one problem.

For some, that is okay, student loans are normal. But I wanted to make my own choices instead of having debt make choices for me. Intuitively I knew that $30k was a crap ton of debt. I couldn’t take a job at a non-profit (paid too little), and I couldn’t start my own business, because I had a debt to pay off. My paycheck was officially owned before I even got my hands on it.

Treating debt like a necessary part of your life will cost you. What are the costs, you ask? Well…

Your freedom. It took me years to figure out that debt was stifling my growth. I didn’t even know I had problem until it hit me in the face – rather abruptly too. Okay, let’s get down to business. This is exactly what I did to pay off $30k in 10 months.

Step 1: The Plan
In order to tackle the Goliath of a debt, I needed a plan. Something that was actionable, measurable, and ambitious. I also needed a pretty big shovel to fill the hole I dug myself in.

I’ve always been a big believer in the saying…“If people aren’t laughing at your goals, you aren’t dreaming big enough.” My first goal was to pay off my debt in 12 months. When I shared this goal, I not only got some strange looks, laughs, and smirky smiles, but I was also told I set my bar too high.

Anytime you go about trying to achieve a massive and audacious goal, people will try to put your dreams down. Don’t let them. People project their version of the world onto you. If they don’t think it’s possible for them to personally accomplish the goal, they will tell you it won’t be possible for you to do it either.
On October 10, 2010 I wrote in a notebook: Pay off $30,000 by October 2011.Thanks to the power of setting goals correctly (and a ton of grit), I actually beat my goal by two months. In August of 2011, I made my final student loan payment. That night, I slept like a baby.

Step 2: The Sacrifice
Part of my plan of paying off my debt was knowing that I had to make some really, really big changes. Cutting out buying coffee twice a week was not going to cut it. To get drastic results, I had to make drastic changes.

The two shovels that I used to fill the large “debt” hole:

Have you ever been so busy that you literally couldn’t even make it to the bank, let alone go shopping? That was my life. Being so busy was a huge blessing in disguise. I didn’t even have time to spend money if I wanted to. My sacrifices were drastic (but passive streams of income can be game-changers).

I wanted unreal results, and I got them. It wouldn’t be fair if I didn’t discuss the financial tools I used to make this happen.

Next week, we’ll share how these and the perks of living debt free in the Ultimate Guide for How I Paid Off 30,000 in 10 months, Part 2. If you’re interested in connecting with Whitney Hansen for one-on-one coaching, reach out here. 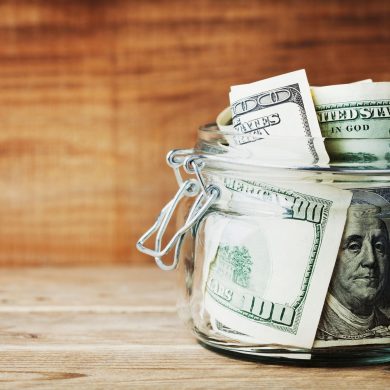 How to Stretch Your Emergency Fund