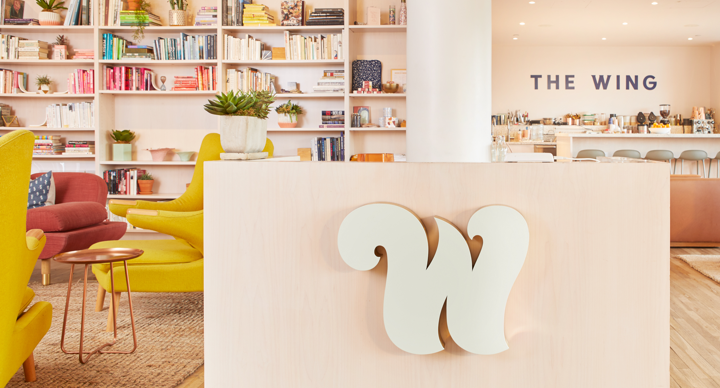 The Wing Soho: Glinda’s Coven, Communing, and Co-Working in a Women’s Only Co-Work Space

Lena Dunham just walked by me in a pink flowy skirt. The woman across from me is drinking tea from a petite tray with the cutest carafe of cream you ever did see, scribbling vigorously onto her tablet.
There is a group of women seated at a table behind her, one of whom is rocking ice blue hair. They are poring over binders and documents, collaborating on something, as are many other women in the space. Most women, however, are working solo. They’ve just come here to be solo amongst each other.

Welcome to The Wing in Soho, New York.

It’s one of a multi-branch coven of thousands of women around the country (and soon to be London, so the old country, and Toronto, so nice country, and also Paris, so heaven) who congregate to work, meet, network, and overall sit on really amazing furniture.

It’s basically the love child of WeWork and a modern woman’s social club, with a laser-focused ethos of female empowerment and prosperity.
The bricks are white, the chandeliers, baubled. There’s a Reclaiming My Thyme virgin cocktail and hot coffee and fruit for free. The straws in our cold brews are metal, and the plants—I recently read in Vogue—are plastic…but it’s fine. It’s a little disappointing, but it’s fine.

The concept of The Wing is not for everyone. Some women can’t imagine being around only other women all day. Some men resent what they regard as reverse sexism. It is a one-sex only club with the literal words “No Man’s Land” (also the name of their [awesome] magazine) written in electric lights near the Beauty Room. (There is a Beauty Room, by the way.)

They’ve faced discrimination investigations from the New York Human Rights Commission for actively not hiring men. There is legality involved in whether The Wing is legally allowed to exist at all.
But if a high ceilinged room filled just with women is bothersome to those denied entry, perhaps we should fix these kinds of rooms first? Especially when discussing things like women’s rights in society? For example:

Birds of a feather.

Let’s be clear: The Wing s not a safe space from men. No one is forming a shield wall around each other so the ladies in the middle can fill out their spreadsheets and PowerPoints without fear of being groped.

﻿This is just a space for women; where the half of the population that is not yet awarded the same respect, autonomy (or salaries) as the other half can just be; where panel events are held with groups of successful women who know what it’s like to pave their way through the world with specific, gendered challenges.

But it’s not very diverse.

I had a friend who recently attended an event at the Soho location and was shocked and downtrodden to find that she was one of only two women of color in a packed house. The worst part? The other woman was the friend she’d brought with her.

While that was a singular instance, it does expose a very pertinent issue: If The Wing is only attracting white women, it’s not the moving the progress needle. Not even a little bit.

The glimmer of hope here is that The Wing is opening up tons of new locations on both coasts and overseas, so the opportunity for diversity is there—as long as The Wing taps into it. (Side eye.)

Currently The Wing has three spaces in New York—Dumbo, Flat Iron, and Soho, as well as one in D.C. San Francisco is coming in October and others are being built in L.A., Williamsburg, Seattle, West Hollywood, London, Toronto, and Paris.

Curious? Check them out at https://www.the-wing.com.

Fellow Contractors: Why I Decided to Hire an Accountant