Nav.it Takeaway: Wanderist Life founder Libyria Jones believes working remotely can empower you to work in ways—and places—that boost your productivity and create a healthier work-life relationship. So she created a travel abroad program that enables adventure-seekers and their families to experience that freedom for themselves.
The end of vacation often brings a sense of despair as we realize it’s time to return to reality. But what if your vacation setting was your reality? Telecommutes are becoming more and more common as employers realize they can save money—and improve their employees’ quality of life—by not tethering staff to their desks. With the freedom to work from anywhere, the possibilities are suddenly endless (and, albeit, a little overwhelming).
For Libyria Jones, the ability to work and roam simultaneously isn’t a plus, it’s a must. Growing up, she was determined to see the world—and she got her first chance while she was in business school at Florida Agricultural and Mechanical University. A professor hand-selected Jones for a finance internship in China, but she was ultimately told she couldn’t attend because she planned to bring her young daughter along. That rejection would ultimately become the butt of a joke that would alter the course of her life—both professionally and personally.
Making Dreams a Reality
Wanderist Life was born when Jones recommended an adult travel abroad program to a friend. Although she was able travel frequently for work, she joked that opportunities like the program didn’t exist for professionals with children. “’Maybe I should just start my own [program], and let people who have kids go on it,’” Jones recalls saying.
She couldn’t shake the idea, so she decided to make it a reality. She took a role that enabled her to work remotely, and used her free mornings and evenings to develop a business plan. After just a few months, she launched a website, and in September of 2015, she made her business “Facebook official.” Three months later, she began accepting applications. On July 31, 2016, the first Wander Year group boarded a plane to Prague.
Living Like a Local
The Wander Year enables participants, or “Wanderists,” and their families to live and work remotely in four cities around the world for three months at a time. Each destination is carefully vetted by Jones and her team, down to its WiFi connectivity—and before the trip even begins, the Wanderists partake in a 12-week training course to help prepare them for the experience.
In addition to scheduling all flights, the Wanderist Life team navigates each country’s entry requirements, and secures apartments in neighborhoods that are equal parts fun, convenient, and safe. Each participant has their own bedroom and workspace, as well as basic necessities like a kitchen, linens, and laundry. The team also organizes social or volunteer opportunities, and hosts networking and “mastermind” sessions so that the Wanderists can make moves, polish business plans, and stay motivated.
Having a job isn’t a requirement for the program, but according to Jones, it’s kind of inevitable: by the end of the first Wander Year, three unemployed participants had decided to launch their own businesses. The idea of embarking on a year-long journey abroad, regardless of career status, sounds like an opportunity only afforded to the successful or wealthy. But with Wanderist Life, the experience is within reach.
The monthly fee, which covers all program-initiated travel, lodging, and activities, comes in at $2,200. That’s less than the average cost of rent in N.Y.C. and San Francisco, and slightly more than the averages of L.A. and Chicago. In all, the price of a year-long, life-altering experience for one person is $31,400—with a $2,000 refundable deposit.
Embracing Imbalance
For Jones, the best part of being a digital nomad isn’t the ability to roam freely. It’s having the chance to work where she feels most comfortable—and having more time to spend with her family. “People need to have enough space to live their lives,” she says.
Still, finding equilibrium between work, travel, and family is a never-ending quest. And as a business owner, the pressure is doubled. “There’s no such thing as balance, so you’ve got to be able to forgive yourself for not doing everything,” says Jones. “I’ve eliminated ‘should’ from my vocabulary—it’s either ‘I will’ or ‘I won’t’.”
Like Mother, Like Daughter
Her daughter joining her on the premier Wander Year made it easier for Jones to wear multiple hats—and stay in check. The experience also made her realize the positive impact mobility can have on education. After her daughter immersed herself in “The Diary of Anne Frank” for a school assignment, Jones decided to bring her along on a quick business trip to Amsterdam. There, she was able to visit the apartment that Frank hid away in, walk through the annex, and see the diary in person. “Having that opportunity truly amplified her learning, in a way that a traditional classroom never could have,” says Jones.
Although the Wander Year doesn’t offer a formal education component, Jones and the other two mothers in the program worked together to create plans, hire teachers, and fill any gaps. She was also impressed by the quality and efficiency of the virtual program she enrolled her daughter in, which featured oral exams, weekly phone calls, and live classes. Although she recognizes that not every student would thrive in a virtual environment, the educational benefit is undeniable.
“Being tied to a desk is archaic. We live in a time where it’s just not required,” says Jones. 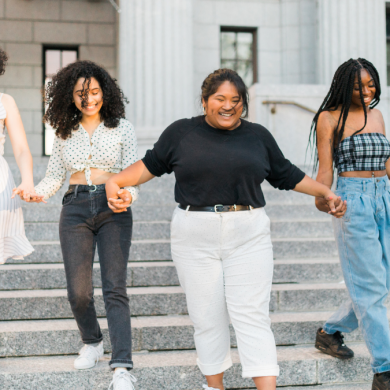