Happy Monday Nav.igators! We thought we’d kick off the week with a little Savvy Insider #inspo.  Meet Lauren Washington. She knew from a young age that she was going to own her own business. But while on the path to launching her first company, she encountered obstacles rooted in race and gender discrimination. Inspired to help current and future black female entrepreneurs find the support and resources they need, she co-founded Black Women Talk Tech, an organization devoted to helping black women create billion-dollar businesses.
For many of us growing up, the question of what we wanted to be as an adult elicited responses that ranged from fanciful to downright preposterous. I personally envisioned myself becoming a tornado chaser, à la “Twister,” or a writer. (It turns out that chasing weather patterns isn’t conducive to a homebody’s lifestyle, thus my falling back on my alternate occupation of choice.) For others, the query was simple to answer and instinctual to follow through with because they’ve always known what they were born to be.
Lauren Washington doesn’t just fall into the latter category; she basically owns it. As a child, she babysat, sold tomatoes from a neighbor’s garden, and worked at a local candy store. She was driven by the idea of ownership, of creating something from scratch. “No matter where my winding career path took me, I knew I would eventually end up a business owner,” Washington explains.
Flash-forward to 2018, and Washington has two businesses to her name—the second of which was inadvertently born from the first.
Diving in
Washington was thoughtful and intentional in her launch preparations for KeepUp, an app that aggregates social networks into one seamless feed. She saved enough income to sustain her for a full year, and kept the business as a side-hustle for six months. But when she left her full-time role sooner than anticipated, she was faced with a dilemma: Should she work for someone else, or take a leap with KeepUp?
“I had to choose myself,” says Washington. “After I was able to devote 100 percent of my time to the business, things moved much faster; we ended up winning $250,000 in the 43North competition, which let us build a team, and test product and market fit.”
Started in 2014, KeepUp simplifies social media for business owners, allowing them to connect with consumers in more meaningful ways. A powerful algorithm is translated into easy-to-use tools that not only empower individuals to manage, engage, and grow their following, but also enables them to reach customers at their point of purchase. It’s a business concept that would have all three investors on “Shark Tank” jumping out of their seats, but when Washington started to pursue traditional funding routes, she was surprised at how difficult the process was.
“I couldn’t understand why I followed and exceeded the conventional advice on how to raise money, and still wasn’t making the same progress as others I knew,” says Washington. “I knew women in general were at a disadvantage, but I didn’t realize how dire it was at the intersection of gender and race.”
Changing the .2%
In 2016, digitalundivided released Project Diane, a report that detailed the disparities in funding for black women. The report discovered that between 2012 and 2014, the average amount raised for a startup headed by a black woman was $36,000; the average raised by a white male for a startup that ultimately failed was $1.3 million.
“That report confirmed my experience and that of many other black women,” says Washington. The data compiled by Project Diane revealed that only 11 startups led by black women had raised more than $1 million in outside funding. Additionally, those contributions were almost all funded by the same three investors.
As a black female founder in an industry dominated by white men, Washington noticed a pattern at the tech conferences she attended in 2015: she was one of only three black women in the room. Quickly, she, TresseNoire founder Regina Gwynn, and Co-Sign founder Esosa Ighodaro realized they were having the same experiences—and it wasn’t just a coincidence. “We realized then that if we were [having these conversations], others must be as well. Why not get together and share stories, resources, and support?” says Washington.
So the women did. They formed Black Women Talk Tech with the intention of creating a space where founders could come together to glean insights and build networks. But after their first official event at Google, they saw how impactful and cathartic the experience was for attendees. Says Washington, “It was a no-brainer to keep going. We went from just 10 founders at a retreat to almost 500 people at our most recent conference in February.”
Progress & the Power of Pressing ‘Pause’
Today, Washington, Gwynn, and Ighodaro are actively finding ways to serve women both in-person and remotely. They’re growing their events and developing an online platform called The Collective, which will give their 500-plus members the chance to engage each other through webinars and virtual programs.
“While we haven’t really reached the level of progress that we need to, we’re starting to move in the right direction,” Washington says of the tech industry’s current climate. “There is, at the very least, a growing awareness of the disparities between the funding, resources, and access that minorities and women are getting.”
She has expansion in mind for KeepUp, too. They’re building out the platform’s SaaS (software as a service) product, which will enable smaller businesses to get the same return on investment from their social media as larger corporations. Between her two businesses, it seems like Washington is in hustle mode 24/7, 365 days a year. But the entrepreneur has important advice for her fellow movers and shakers.
“I used to beat myself up when I wasn’t as productive as I intended to be, but I’ve learned that it’s my body’s way of saying I need to take some down time,” she says. “You can’t force motivation and inspiration. You can’t just grind all the time. Give your mind the space it needs to be inspired.” 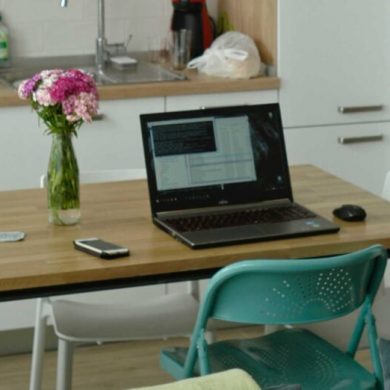